With big changes happening in Adelaide’s Northern regions, it’s an exciting time to build your dream home near some of the largest investment the state has ever seen…

Adelaide’s Northern region is changing fast, currently experiencing with the fastest population growth in South Australia’s history. The northern districts are positioned as Adelaide’s natural growth corridor for housing development as population growth shows no sign of slowing down. Knowing this, the State Government is investing heavily into the region with projects such as $885 Million Northern Connector and $615 Million electrification of the Gawler Line. With the closure of General Motor’s manufacturing as a major source of employment, the State Government and industry are driving employment and reinvigorating the region attracting a new market of home buyers.

The City of Playford – the largest district in the area is undergoing a massive economic transformation as the government embraces future job creation. Breathing new life into the region – $400 million has been invested into the area in the past two years bringing new community services, reserves, and high-tech health precincts driving employment.

More For Your Money

Adelaide’s Northern areas have always been an affordable option for first home buyers looking to build a new home. In 2017 the median house price in the Playford area was $142,008 lower than the rest of South Australia.

However with significant new developments such as Miravale at Angle Vale, Aspire at Evanston South & Virginia Grove building in a new community with modern amenities and large blocks is becoming easier then ever. With this, housing prices are booming in certain areas with Virginia ending 2018 with a 33% increase in dwelling value, the second highest growth in South Australia. As urban sprawl continues, further-out communities such as Freeling Estate have benefited with more economic activity revitalizing their high-streets with fresh businesses for locals to enjoy. 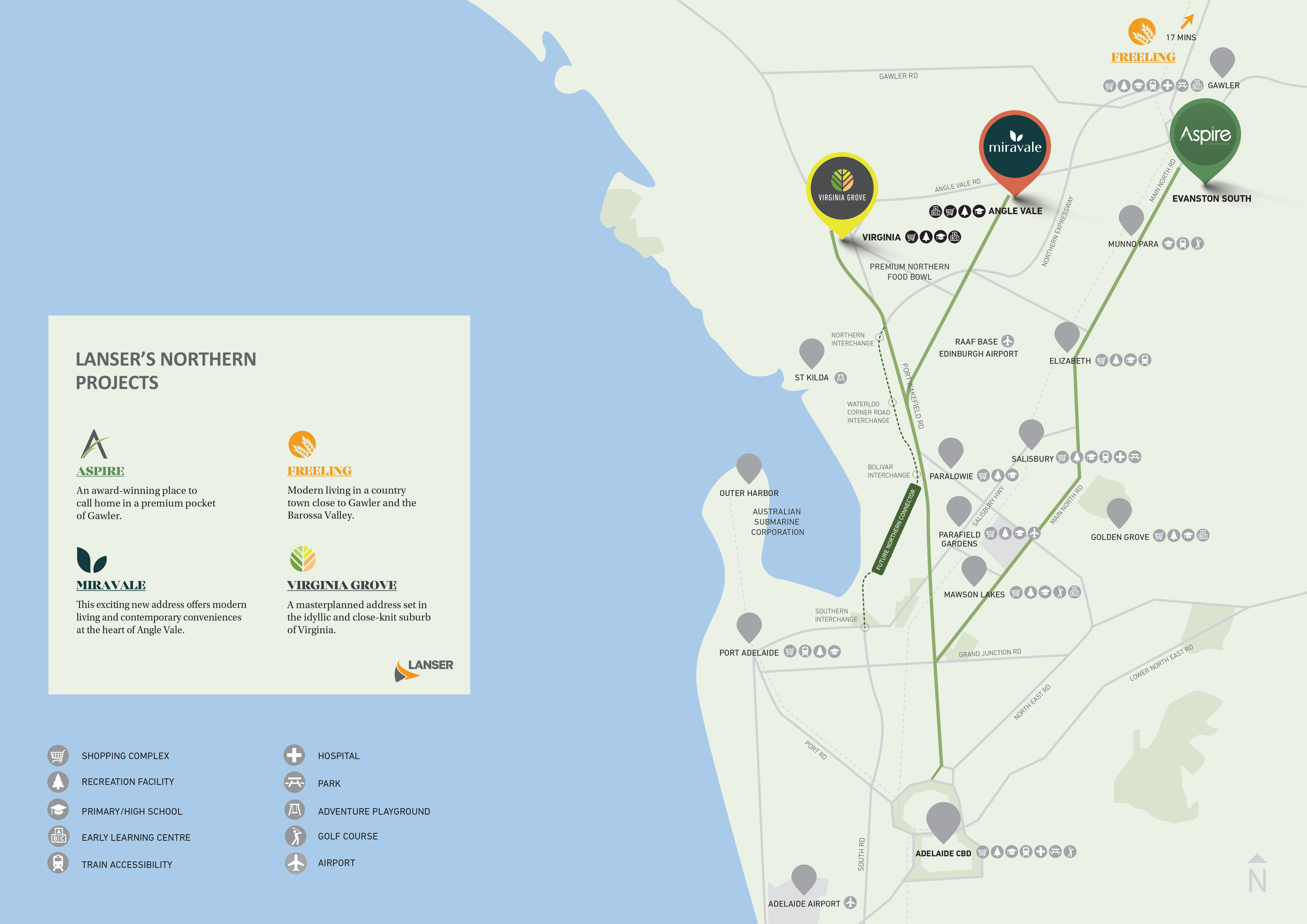 Live Close To Everything

The Northern Adelaide Region is positioned as the gateway to South Australia’s food and wine regions, Barossa Valley and major economic investments in renewable energy, mining and defence. With transport infrastructure the most modern in the Adelaide Region, accessibility to all things great in South Australia has never been easier. The world famous Barossa wine region is in the north, any empty weekend can be filled sampling world class wineries without straying too far from home. Pair your wine with fresh produce, the Northern districts are the food bowl of South Australia – with many farmers markets to choose from.

If you are the holiday, fishing or adventuring type – the North has the easiest access to the Princess Highway and Yorke Peninsula for a quick getaway. During your work days, the Northern connector is cutting down the commute to the CBD to 30 minutes making working anywhere more appealing.

The biggest driver invigorating the region is the introduction of future job sectors nowhere else in the state. Since securing the $85 Billion naval ship building program a predicted 8000 new jobs will be created mostly in the North. More than 85% of Adelaide’s defense industry activity occurs in the northern suburbs.

Angle Vale was the fastest and largest-growing area in South Australia in 2016-17, increasing by 6.2 per cent (760 people). Around 69 per cent of this growth was due to net internal migration as people move to the region because of employment. The State Government has announced their Northern economic plan with $25 Million committed to accelerate job creation across new growth industries in the region. The greater aim of this plan is to create 15,000 new jobs by 2025 in the north in sustainable industries giving long term employment.

The information in this information blog and the links provided are for general information only and should not be taken as constituting professional advice from Lanser. Please read our Blog Disclaimer.